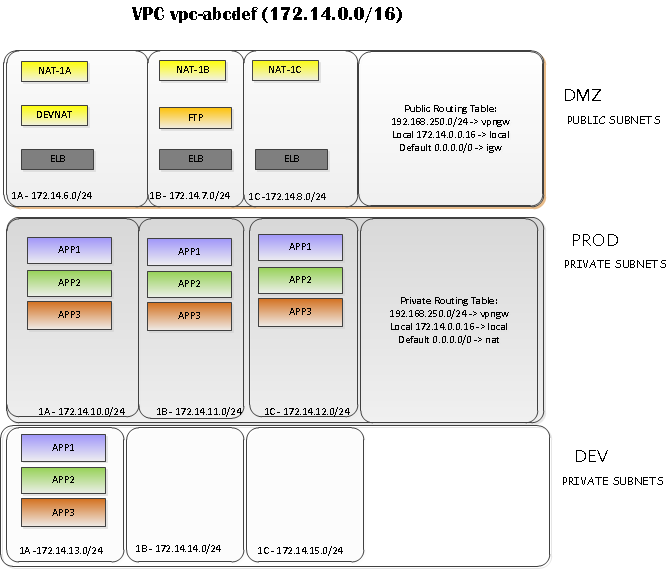 A subnet provides virtual network segmentation similar to a VLAN or physical broadcast domain.
Each subnets is assigned a network block (172.16.99.0/24) and a subnet id (eg: subnet-abcd1245) .

There are two flavors of subnet; Public and Private .

Public subnets are internet routable and may contain resources such as ELBs, EC2 instances, etc. A public subnet is associated with a route table which directs its default route (0.0.0.0) through a pre-defined Internet Gateway device (IGW) .

An EC2 instance defined within a public VPC subnet has no internet connectivity until it has been associated with an EIP. Internet traffic from a public subnet is routed from the source address of each EIP.

Optionally, a private subnet or subnets can obtain internet access by directing traffic through an EC2 NAT instance with an associated EIP.

Route tables are utilized to construct both private and public subnets. They are also used to implement VPN links in coordination with VPC VPN gateways.

Each subnet may be associated with only one route table at any given time.

Elastic Load Balancing (ELB) may be implemented within VPC. One or more public subnets are associated with each ELB.
Inter-Region failover can be achieved by building applications across subnets which span Availability Zones:

Externally-facing ELBS must be associated with public subnets . Be aware that subnets attached to an ELB must be at minimum a /24 (256 hosts) !

get off my lawn!